/ / Comments Off on Best Service Titan 2 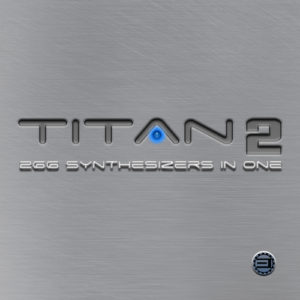 Experience the most extensive and diversified synthesizer in a completely new version!

TITAN 2 outshines its predecessor by doubling its sound-library, adding countless new presets, a fully redesigned user-interface as well as sound shaping potential exceeding even the originals!

TITAN 2 emulates no less than 266 synthesizers

The content covers the full spectrum of this instrument’s glorious history. Here, you will find everything of distinction, ranging from the 70’s until today, covering every kind of sound synthesis. This plug-in includes the latest virtual instruments, analogue classics, legendary modular systems, prominent digital synthesizers, powerful workstation as well as unheard rarities.

The sonic spectrum of 45 years of synthesizer-history makes TITAN 2 an instrument that is unmatched and unique in diversity.

“This is truly a bottomless ocean of sound”

The developers faced the challenge of preserving the incomparable character of the original instruments, yet enabling the creation of individual and entirely new soundscapes with TITAN 2. 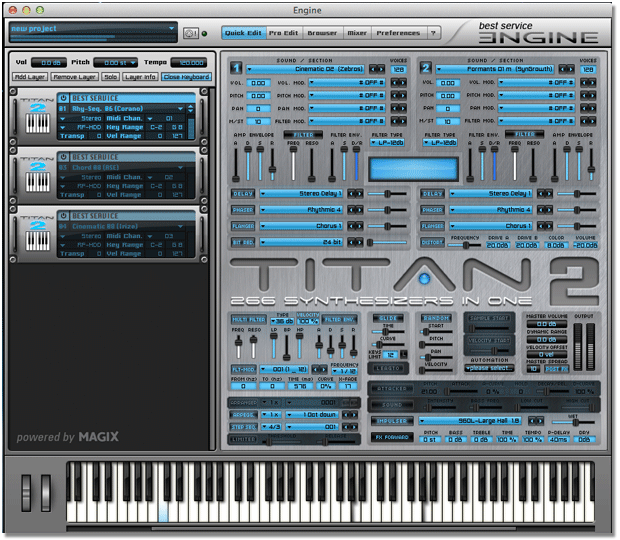 TITAN 2 comes with a gigantic library of 12,800 presets. Besides basses, leads and pads, the new version  offers various sounds designed for current dance productions. TITAN 2 does not simply offer sounds of current famous synthesizers, but is actually able to often replace these instruments – thanks to its carefully reproduced wave forms and elaborated edit-functions. Because of the enormous bandwidth of synthesizers being used, TITAN 2 offers an unbelievable broad palette of sonic characters. However, TITAN 2 does not solely define itself by the sonic sources but by the presets being carved from these.

TITAN 2’s user-interface was completely redesigned. It now allows immediate access to almost every parameter. Even when producing under pressure of time, you will be able to use TITAN 2’s full functional range without getting lost in countless menus or subpages. 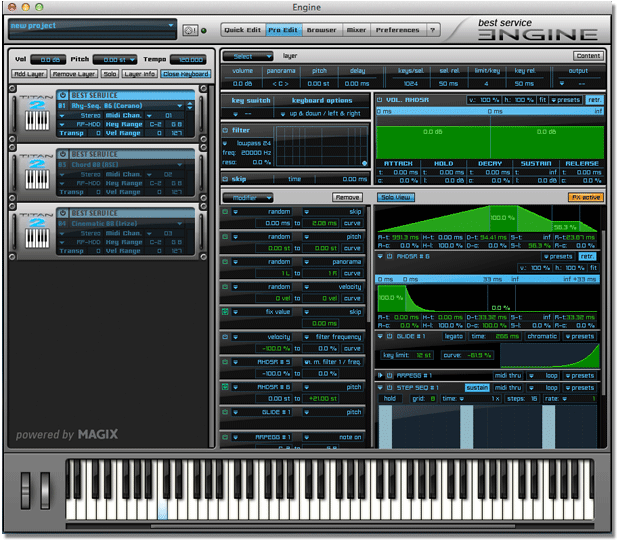 TITAN 2 contains the full content of TITAN 1. The former was focused on classic hardware-synthesizers while the new version completes this large sonic choice with sounds targeting current dance- and pop-genres/productions as well as film and video-scoring. Among others, TITAN 2 includes the fattest super-saw leads available, Dubstep-sounds for EDM-genres, cinematic-, orchestral- and natural-sounds as well as various electronic classics. Also, the original 5,500 sounds of TITAN 1 can now be tweaked, modulated and mixed more detailedly and effectively using TITAN 2’s revamped user-interface.

A new feature in TITAN 2’s preset browser is the possibility to search for sound sources – in addition to the existing search for sound categories. This way, you will find sounds of your favorite instruments in the blink of an eye!

These improvements facilitate and speed up your workflow in TITAN 2:

It took more than 15 years and one of the largest private synthesizer-collections to realise the recordings of TITAN 1 and 2.

The complete sound-library consists of over 11,000 synthesizer-multisamples and approximately 200,000 single samples. In addition, 1,800 up-to-date drum- and effect-sounds are offered, that were created independently and not just taken from the library’s synthesizers. To achieve best possible results, the multisampled instruments often contain fully recorded filter sweeps, multiple dynamic layers as well as up to 61 key zones. Almost every single sample was made inaudibly loopable with greatest care.

The library’s sample-content comprises a massive 80GB. Thanks to inaudible data-compression, this amount was reduced to a friendly amount of approximately 25GB on your hard-drive. At the same time, loading times for presets were significantly sped up and will, at the most, take one second – no matter what size.

Best Service ENGINE 2 Sample Player is included in this product!